As part of our charitable remit, the Society for Endocrinology has the pleasure of supporting and promoting the work of a number of patient support groups. This blog post is written by Ellie Magritte from the on-line resource dsdfamilies.org which supports families, children and young people living with a disorder/difference of sex development (DSD). 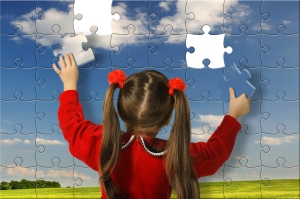 As the parent of a growing daughter who has a Y chromosome, I find myself both bemused and excited on a daily basis at how kids are able and ready to accept information which for so long seemed so scary and complex to me.

At her birth the only thing I really understood, the only thing that had any meaning to me, was that she would not be able to carry babies. All the rest was pretty much a mystery– pieces of a puzzle that I could not put together.  An endocrinologist? I did not have a clue that this was a doctor who specialised in hormones.

So, how do you begin to tell your daughter that she won’t have periods, or that she cannot grow babies in her tummy. And how do you tell her about the different pathway her body has taken to becoming a woman, one whereby she’s a girl with a Y chromosome and has, for now, gonads that developed like testes?

More importantly however, what happens next? How do children negotiate having this knowledge on a day-to-day basis, whilst in school they may learn other things?

A little while after telling our daughter, age 9, she would not have periods or be able to have babies she told me that a friend in her class had got a book about how the body develops [at puberty], and could she get one too.  ‘Of course’, I said. And the next day we went to the bookshop, and sat down on the floor (with her siblings running riot behind us) and looked at various books about puberty. Whilst we were there, I went over some of the images that showed a typical vagina and we revisited how her vagina had developed differently from the ones pictured in the books

Shortly after that she came to see me in the kitchen with one of her best friends. They had looked at the puberty book together and my daughter asked  me – whilst I was preparing a spaghetti bolognaise – whether I could explain again where periods come from. ‘Of course’, I said.

I did not flinch and explained scenarios for girls who do have periods and those who don’t. I was very proud of myself afterwards.

When she was ten, she learned in school about (typical) puberty. Of course, this led to other conversations at home about how things were different for her.  During parents’ evening however, I saw a test she had done in her exercise book  in which she had given the ‘right’ answer (girls get periods when they go into puberty). And that was really hard for me. I asked her about it the next day – I asked her if that was hard for her too. ‘Mum’, she said, ‘I just did what the teacher wanted me to do’.

Since then she has also learned about her chromosomal make-up and that she has gonads that developed like testes. And we reminded her that in school –and just like with the puberty lessons – she is likely to learn only the basic stuff, because it is quite complicated for a biology teacher to explain all the variations that exist about how people develop and grow.

She confidently weaves all this information into her growing up in ways I could never have expected.

She is 12 now and a few months ago, after I had put her sister and brother to bed, she told me, rather excitedly: Mum, I have just done some ironic homework’. ‘Oh’, I say, ‘What was that?’ ‘I have to make a presentation on food, and my topic is Healthy Eating for Pregnant Women’.

I hesitated for only a couple of seconds, and then she said ‘Do you get it mum?’ I laughed, and I said, ‘yes sweetheart, I get it’. And then for the next half an hour we worked together on her presentation, talking about foods that pregnant women should or should not eat. I couldn’t have conceived of that conversation twelve years ago …

And last week came the big one. We had only just left the hairdresser (she had her hair straightened for the first time!) when she told me on the way to the car ‘Mum, next week we have a biology test’. ‘Oh’, I say, ‘is it human or plant biology? ‘Human. Genes and chromosomes and stuff’, she says. ‘Did the teacher just talk about the basic stuff, or did she also talk about the variations that exist?’ I ask. ‘Just the basic stuff, we will learn more about difference and stuff in year 4 or 5’ she says.

We spent last weekend reviewing the materials, talking about chromosomes, and she showed me excitedly a genetics website they had looked at in school. ‘That would be interesting for the new website you are working on, wouldn’t it mum?’ she says. ‘It would’, I say, ‘thank you for showing it to me’.

Today she’s getting her marks – and she told me this morning something she’s never said before: she really wants to have full marks for this test. To paraphrase Humphrey Bogart in Casablanca ‘Of all the tests, in all the world…’

But where once I was scared, I now look forward to her expanding her knowledge. And she does so make me laugh.

If you’d like to read about how we explained ‘Genes and chromosomes and stuff’ please go to ‘Amazing you’- a booklet written to explain PAIS to a young child.

In Spring 2015, dsdfamilies.org –with generous support from the Society for Endocrinology and Jeans for Genes is launching a sister website for teens with a dsd: www.dsdteens.org